By protective reflex, the hands are primarily exposed during trauma.
As a result, wrist fractures are the most common.

At GO, we specialize in trauma to the wrist as well as the other 27 bones that make up the hand.

We also treat all pathologies related to worn joints (arthritis) using the most sophisticated techniques.

In the simplest forms, wrist fractures are treated by immobilization. In the case of a more complex wrist fracture, surgical treatment with a plate and screw is indicated.
Most often, the term “wrist fracture” refers to a fracture involving the lower (distal) end of the radius. This fracture may also be associated with a fracture of the ulna or a ligament injury.
A wrist fracture is a very common trauma that can affect the entire population, regardless of age. It can be caused by a domestic accident as well as by a sports accident or an accident on the road.
The fracture usually occurs after a fall on the hand.
In younger patients, the fracture is often caused by a violent trauma (skiing accident, fall from a high place). In older patients, especially women affected by osteoporosis, the bones become fragile and can fracture with a more trivial trauma.

Following a shock or fall, the wrist may appear swollen and deformed, or simply painful. While pain is the first sign of a fracture, there is no direct relationship between the severity of a fracture and the pain experienced. If the wrist looks unusual (twisted or swollen) after a fall or impact, then a fracture can be assumed. To confirm the diagnosis, it is important to take an X-ray. Indeed, the diagnosis of the wrist is essentially radiological. A CT scan may be requested in case of a complex fracture requiring additional information.
The prognosis is often benign in case of a simple fracture. In case of complex fractures, the prognosis may be more difficult with residual pain and loss of mobility.
Treatment of a wrist fracture by immobilization is proposed for non or minimally displaced fractures. A displaced wrist fracture is usually treated with a plate and screws. The goal is to find the least aggressive method while allowing optimal recovery of wrist and hand function.
In case of a displaced or unstable radius fracture, fixation of the bone can be performed by placing an anatomical plate specially adapted to the anatomy of this bone, by its shape and its small thickness. The screws can be locked into the bone and also into the plate. The incision is made on the anterior or posterior aspect of the wrist, allowing access to the radius. The operation is generally performed in a hospital, the anaesthesia can be loco-regional (only the arm) or total.
Immobilization with a splint is generally done for a period of 3 to 6 weeks. The long fingers and the thumb are “free” and can be used for the gestures of everyday life. Generally, rehabilitation begins at the end of the immobilization. The postoperative course of a wrist fracture surgery may vary depending on the technique used and the type of fracture.

Complications following surgical treatment of a wrist fracture are rare, but possible:

Osteoarthritis of the thumb base joint

It corresponds to the osteoarthritis of the base of the thumb and manifests itself by the progressive destruction of the cartilages of the joint between the trapezium and the first metacarpal. This arthrosis can also affect other joints around the trapezium. It is very common, affecting mostly women, and most often begins around the age of 50. It can be well tolerated despite the importance of radiological signs and deformations of the thumb, or it can become very annoying in daily life, leading to pain, a limitation of the mobility of the base of the thumb and a decrease in the strength of the hand.

The diagnosis of the rhizarthrosis (basal thumb osteoarthritis) is based on the patient’s complaint, the clinical examination and X-rays.

The treatment of the osteoarthritis of the basal thumb in the first instance, is medical. It is based on analgesics, anti-arthrosic drugs, a modification of the gestures and the setting of a rest splint (orthosis). This brace is most often worn at night, either temporarily or permanently.

Surgery of the rhizarthrosis is only considered after medical treatment has failed. It consists of the placement of an articulated prosthesis fixed in the metacarpus (stem) and the trapezium (cup) in order to eliminate the painful friction in this worn joint. The procedure can be performed under local or general anesthesia, depending on the agreement between the patient and the anesthesiologist. The surgery is performed in the context of a short hospitalization (one night) for optimal management of postoperative pain.

The dressing is changed regularly and a splint is put in place for 2-3 weeks depending on the evolution. The sutures are removed after 2 weeks and an X-ray check is performed. If necessary, some occupational therapy sessions are prescribed.

Joint prostheses are made from materials that will wear out over time. This wear is more or less rapid depending on the patient’s activity. The prostheses can become detached from the bone over time (loosening) or dislocated. Wear, loosening and dislocation can lead to a surgical revision. 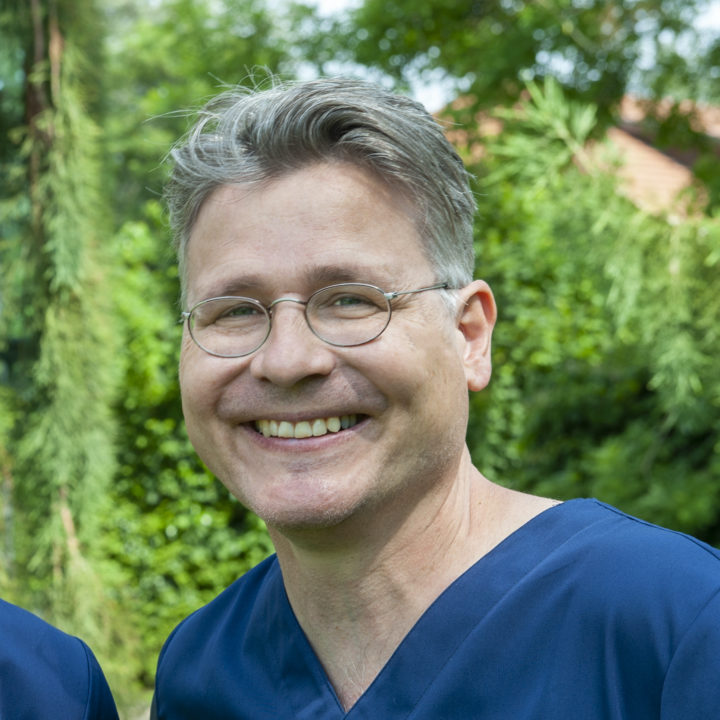 Dr. Jan van Aaken studied medicine in Berlin and then in Tübingen, Germany, and it was finally in Stuttgart that he obtained his medical degree in 1999. A year later he received his Doctorate from Eberhard-Karl University in Tübingen. Between 1999 and 2006, he worked as an intern in orthopedic surgery at the Cantonal Hospital of Fribourg and Bellinzona as well as at the HUG in Geneva. In 2006, he obtained the title of FMH specialist in orthopedic surgery and traumatology of the musculoskeletal system. He then became chief resident and continued his training in hand surgery at the HUG...
Read more